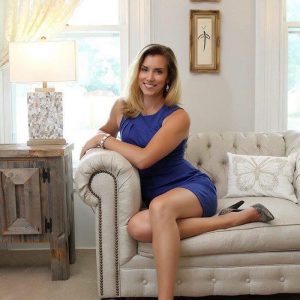 When most people thinks of interior designers, they typically conjure up an image of someone steeped in cosmopolitan culture – who most likely grew up in sophisticated surroundings and a rarified air of cultured ambience.

That is not my experience. I grew up in rural Pennsylvania, where antlers and faux wood paneling are prevailing themes in design and décor. Our town bulldozed a cornfield to make way for the local school, from which I proudly graduated high school with 85 other students.

Even back then, surrounded by corn, cows and crows, I knew I was meant to be an interior designer. While other kids were watching “Saved by the Bell,” I was engrossed with Christopher Lowell.  When I told people what I wanted to do with my life, everyone said, “You won’t make it.You’ll never pay off your college loans.You have to live in a big city.”

When I told my High School guidance counselor, I wanted to be an Interior Designer, she looked blankly at me for a moment. Then she said, “When you get information from colleges, get two copies. I don’t know what Interior Design is.”

Despite my guidance counselor’slack of knowledge, I was accepted into the Interior Design program at Cazenovia College in upstate New York. My dream was to have a career in Boston, MA.  During college, I applied for and received internships there.

After graduation, I moved to Boston to start on my path. While there, I gained invaluable experience designing custom kitchens, high end day spas and salons throughout New England, Cape Cod getaways, brownstones on Boston Common and vacation homes in the Berkshires. Boston is where I met my husband. After having our son we moved back to PA, and a few years later we welcomed our daughter. Shortly after she was born, we relocated to Saratoga County, NY through a promotion my husband received.

After a year of being a stay at home mom, I returned to the design profession, but this time I did it on my terms. I asked to speak at a local library, where I gave a talk about refreshing your space on a budget. From an audience of 45 people, 25 became clients. Before long, I landed a gig designing for the premier Builders Showcase in the region, which turned into being published in magazines, and acquiring many more projects.

I have always followed the path less traveled. Design is not just what I do, it is who I am. It’s connected to my soul, and I bring that energy into every client project I take on. Let me help you with your’s.